This year, the Beau & I celebrated our 10th anniversary!
10 years, y’all. There’s a ton of dance-offs, snort-laughs, and late night star-gazing wrapped up in that decade. This amazing man, who I was pretty sure I had pegged (and knew full-well he couldn’t keep a secret), managed to catch me by surprise.

As a law student, you know surprise anything (unless it’s wine and dark chocolate cake) rarely ends well. My calendar was hectic, I was planning a law school event for the Sports & Entertainment Law Association, and there were more things in the air than I care to admit. So, when this man added events to my calendar, without checking with me first…

I just about lost my damn mind. What kind of shenanigans are these?!?! He’d blocked off an entire day in my calendar and, what was worse, all of the time frames he blocked off were so vague: “brunch,” “dinner,” “adventure.”
My brain does not do well with adventuring during the school year. I am a highly-planned individual and am task-oriented – you know this. That said, I can appreciate the need to veg out in front of a show or even traipse across Dallas at the drop of a hat for some really great Emporium Pies slices. This instance, my dear readers, was both wonderful and terrifying.

I had no real idea of what he wanted to do, but he’d clearly planned the day. What surprised me even most? I went along with it. I was happily allowing him to coordinate my day, up until a classmate threw a wrench in his plans.

One of my classmates dropped the ball on a group assignment, leaving it to me to complete…at the last freaking minute. Talk about a kick in the pants. Ugh.
Instead of our “adventure,” I had to head back home and work on the project, which proceeded to take two+ hours. During this time, the Beau said he was going to step out and come back to get me for dinner. He seemed really worried, but assured me that my assignment was priority – so I trudged on and completed it. #HeIsAKeeper

During the time I worked on the assignment, the calendar changed and pinged at me – the 2-hour drive to dinner was removed. According to my iCal, I had one hour to get ready before we had to leave for dinner. We’ve started somewhat of a tradition of celebrating big moments by enjoying a great meal at various Dallas steakhouses. This anniversary dinner fell to Truluck’s and it was exceptional! We enjoyed a seafood tower, wedge salad, lobster mashed potatoes, spinach, and two steaks: prime ribeye + filet. 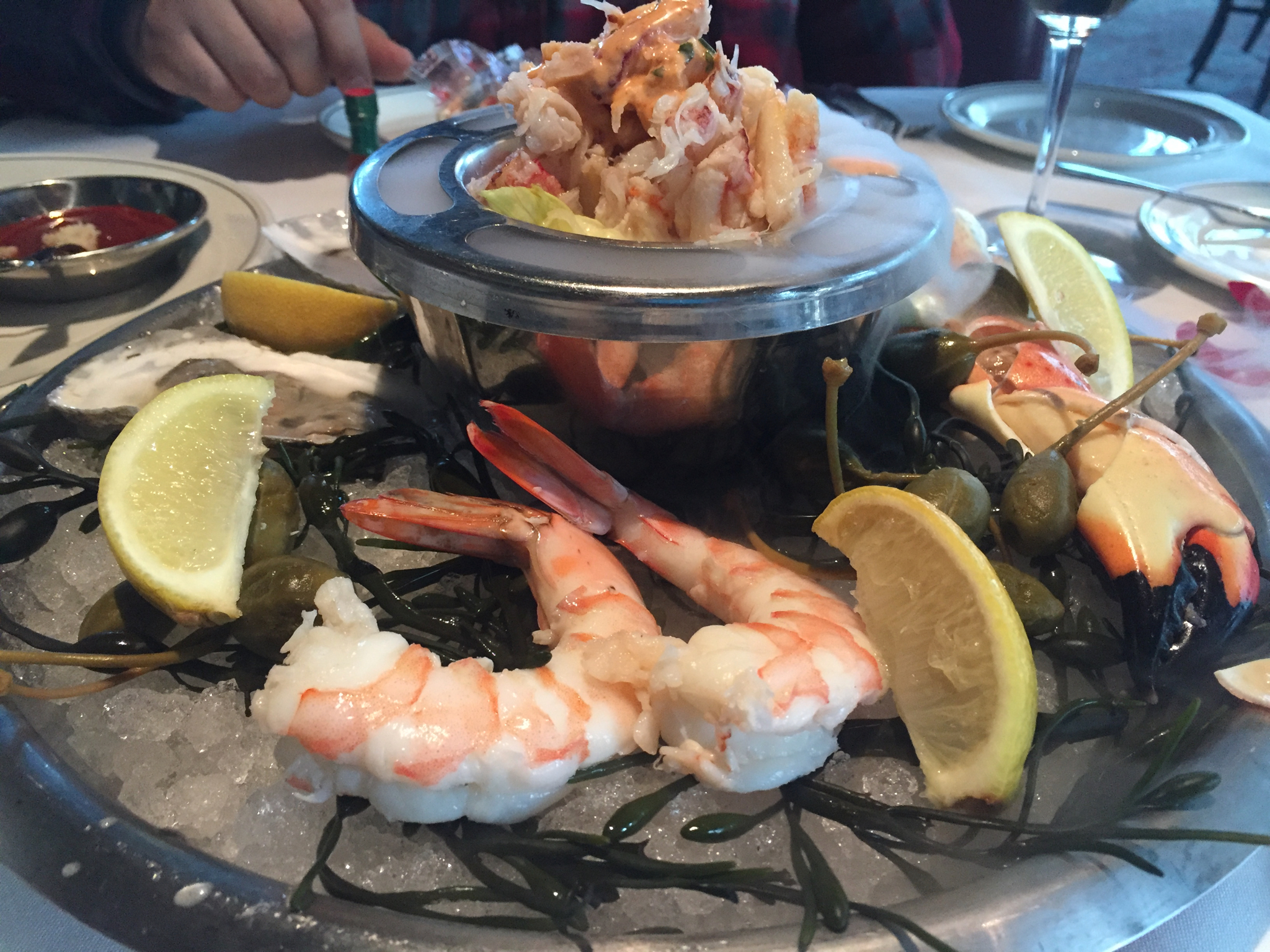 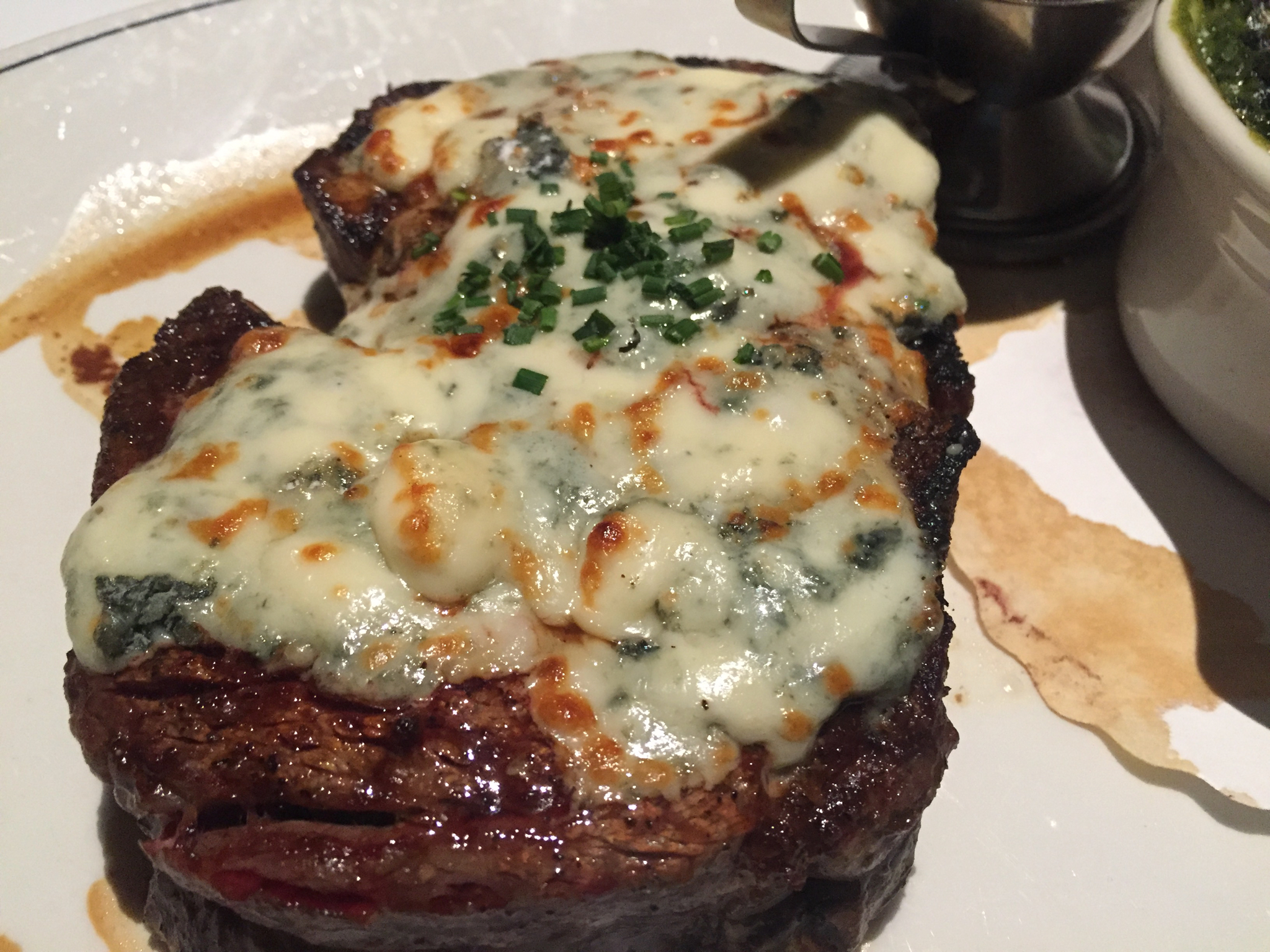 The creamed spinach was delicious, but I was sad I agreed to adding the gorgonzola to my steak; not such a great combination. By this point in dinner, we’d begun talking about gifts (the Beau received a Nintendo Switch) and just how happy we were together. It’s true. Everything was cheesy (grade A Wisconsin), but wonderfully sweet. We discussed our plans, where we hope to be in our careers in two years, and we joked about how time seems to have stood still. [It certainly doesn’t feel like we’ve been together for the better part of a decade]. It was comfortable conversation.

Then he blurts out “do you want to know what I got you? Because, you can’t actually open it.”

He simply said “Books. I am getting you books, to fill the bookshelves I am going to build in the living room. We are going to Barnes & Noble and you have no budget. Buy whatever you’d like.”

You guys. STAHP. I started happy-crying at the table, because – I’ve literally waited my entire life to hear those words. Everything was building up to this moment. On my face was this ridiculous grin, from ear-to-ear. I cannot even begin to describe the level of happiness I found myself floating on. After we finished dessert, Angel and I left for the bookstore; this girl’s second-most happiest place.

As we walked up to the doors, he told me “since Barnes & Noble doesn’t have shopping carts, I asked a few friends to help us carry your books.” When I looked inside the store, there they were – some of the best friends a girl and guy could ask for. 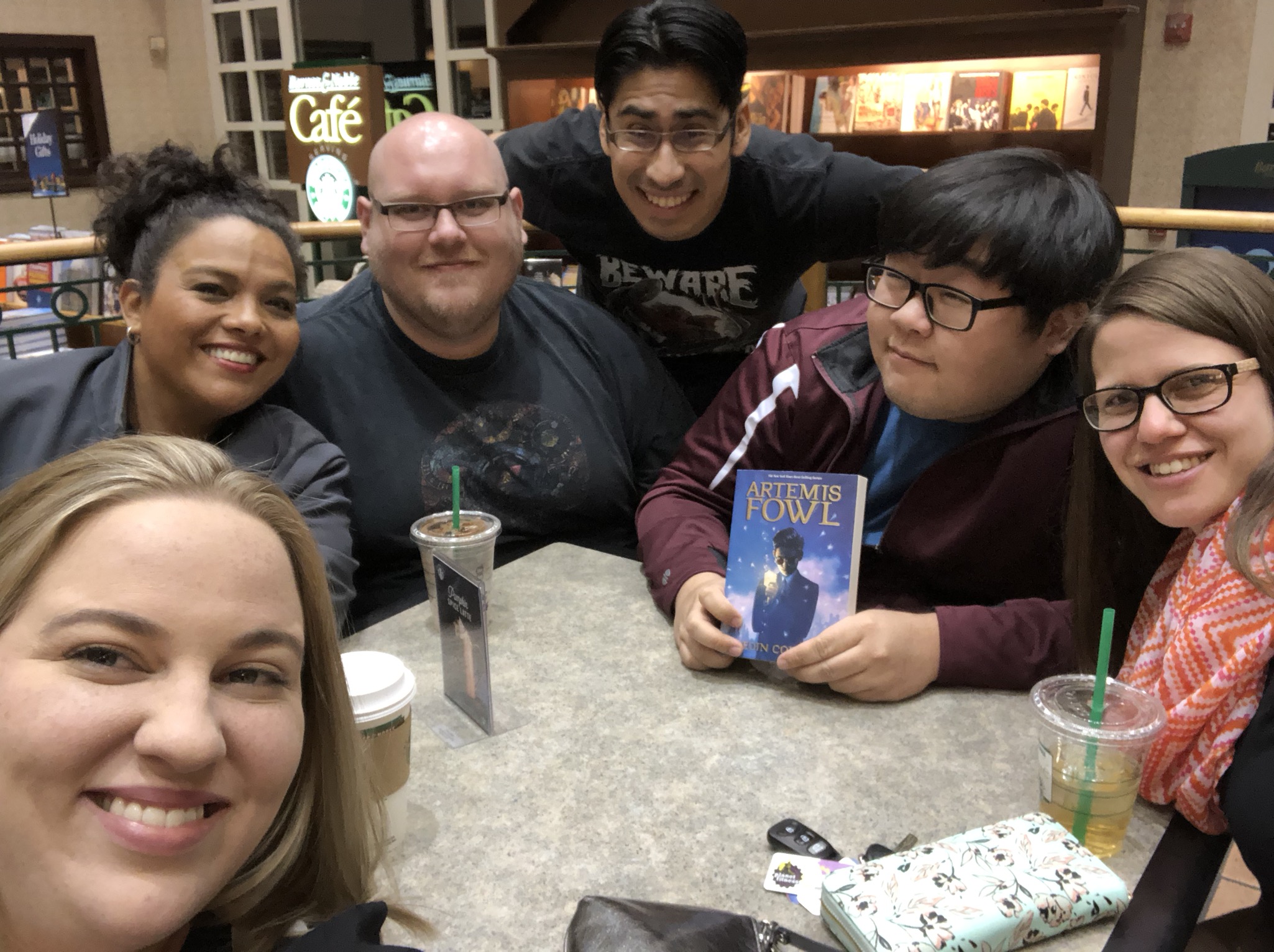 Everyone was so happy to help me run around and carry books. I hit up all the box-sets my collection lacked, ran to snag a few classics, and even thumbed through some new material I hadn’t had a chance to check out before. All the while, I’m piling books onto the guys, while Ashli & Melissa help me find other titles they knew I wanted.

[What I didn’t know, until later, was that each one of these wonderful people was in on the surprise. My heart is so full.] 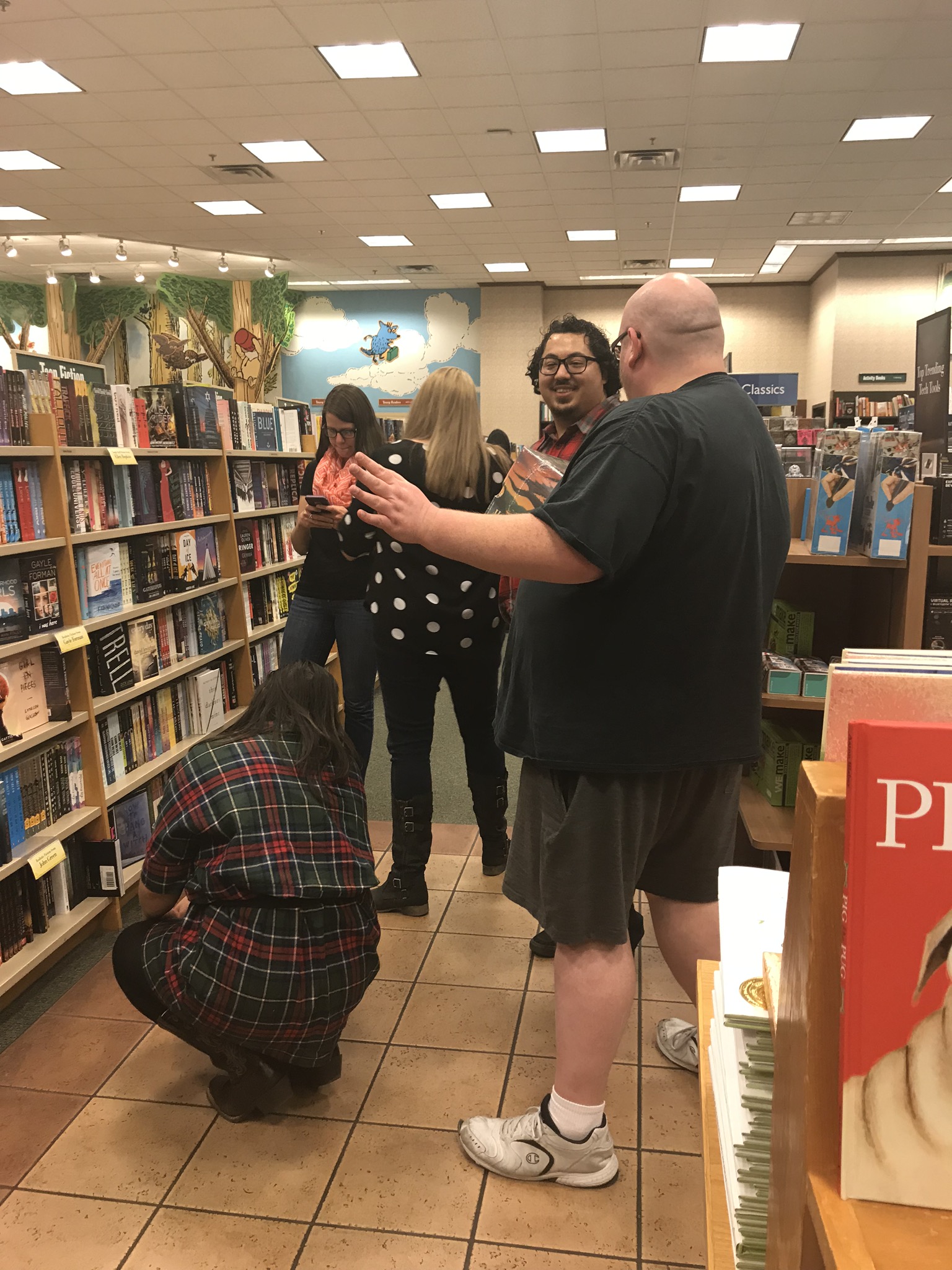 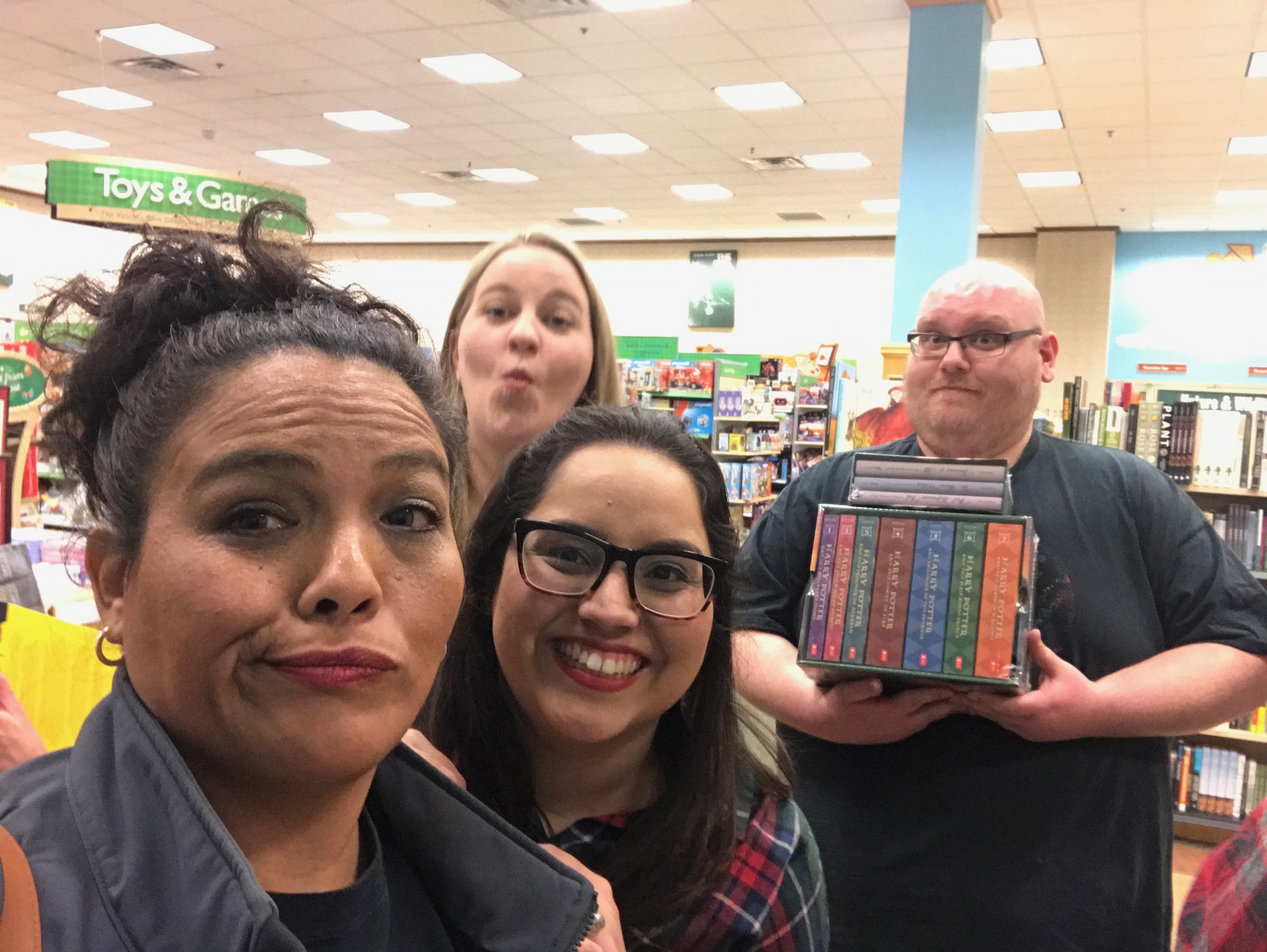 After hauling everything to the checkout counter, and when everything was totaled, TJ handed me a book saying, “Sarah, you forgot this one!” ::gasp::

Only, I already had the original cover-art version of the Artemis Fowl book he handed me. So I replied, “No, TJ. I already have this book.” And I handed it back to him.

But he refused to take it back. He said, “No, you need this. Open it.”

Annoyed, I opened the book: 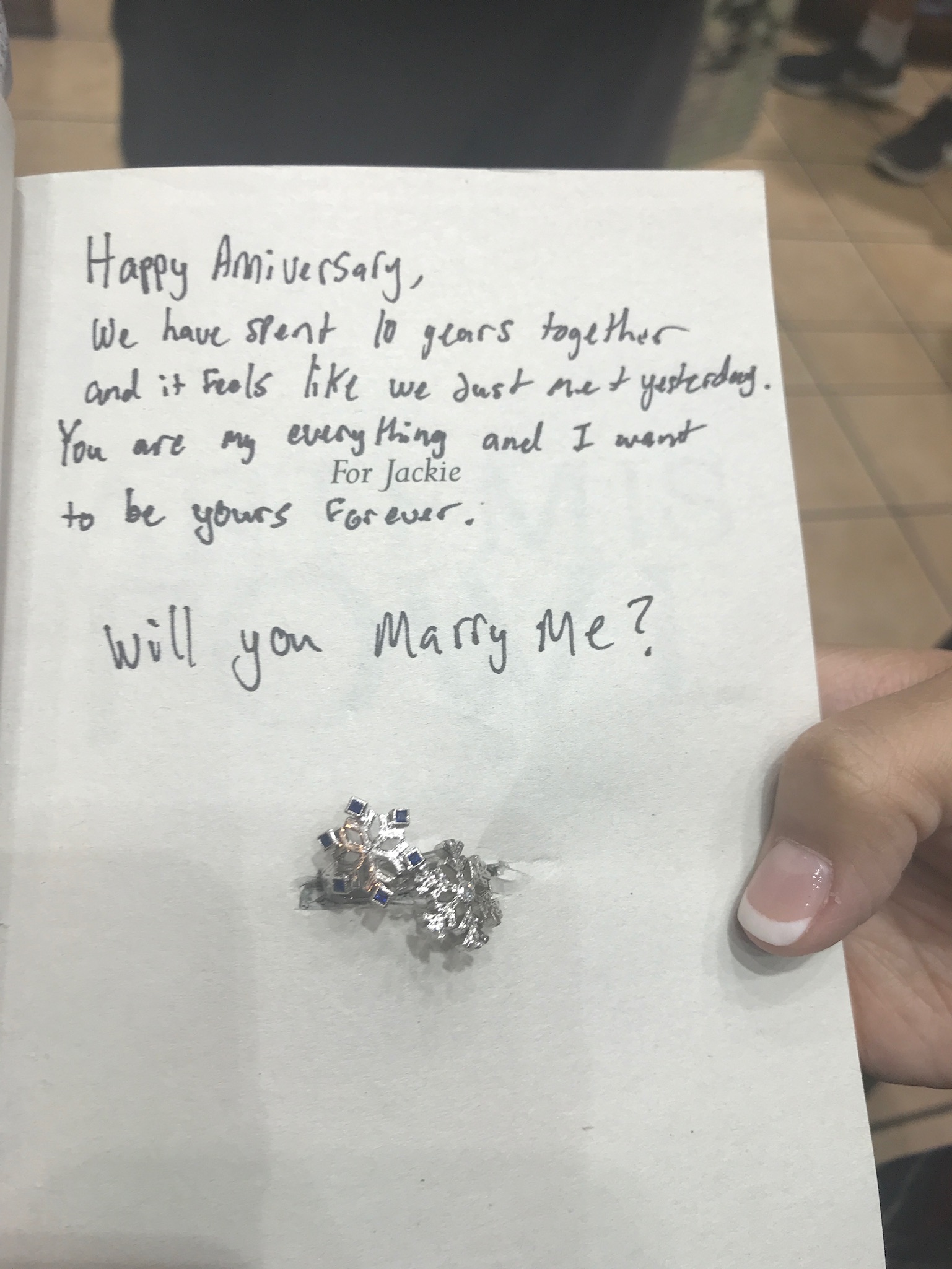 Angel dropped to his knee, and proposed. With a Book. And a snowflake ring, which he designed. I thought cloud nine was hearing about my book shopping spree, but I was wrong.
Everything about his proposal was beautifully-crafted, and wonderfully executed – despite the hilarious events that caused him to change his prior plans. All the while, I was blissfully unaware that he planned anything other than my amazing gift.

The beau did everything just right. He asked my mom for my hand, got down on one knee, and had friends capture the moment. All I can say is that I am one lucky girl.