I’ve got one final left, folks. Just one.
Naturally, I’m up blogging instead of studying – because, well…I’m a foodie. It’s quite amazing to me that I didn’t attend culinary school. I’m thinking that would have killed my passion for outlandish veggies and all the ways to grill/sauteé/glorify such delectable treats.
Instead of a trained Chef, I am a scientist and kind of kookie with my kitchen liberties. Sometimes I stumble [pinterest/google/foodiefind/food network…or any other awesome food hub] across a scrumptious idea. Occasionally, those brilliant flashes of creme-bruleéd greatness are in-fact wicked flops of lumpy sadness.
More often than not however, my kitchen genius shines through.

Seriously, I’m getting better at this fit-foodie cooking [and getting cozy with the spices].

Tonight, this evening before my last final of the semester – I opted for a steak challenge.
For those of you who don’t know, steak has been a challenge for me. I love mine medium-rare, a little more rare than medium actually. You can imagine the difficulty of cooking a medium-rare steak and a well-done briquette, that the Beau seems to love .
How he does it…eh, who the hell knows.
Getting the cooking times right for this has been difficult for me. Not anymore though! I’ve slayed this challenge.

How do you keep the meat juicy?
Never pierce your meat! That’s right. Let it cook and then let it rest! You should always rest a steak for about half the time you cook it. This lets the juices settle in the tissue and then when you cut into it, that beautiful chunk of yumminess is waiting to take you to higher places. If you dare to use a meat thermometer, you may as well be popping the bubble on your steakity dreams, because honey – those juices are gonna run and you’ll have yourself a dry slab of meat.

So, no matter how you like your cow, it should always be juicy. [At least, I think so.]

Now, behold the fruits of my kitchen labor. 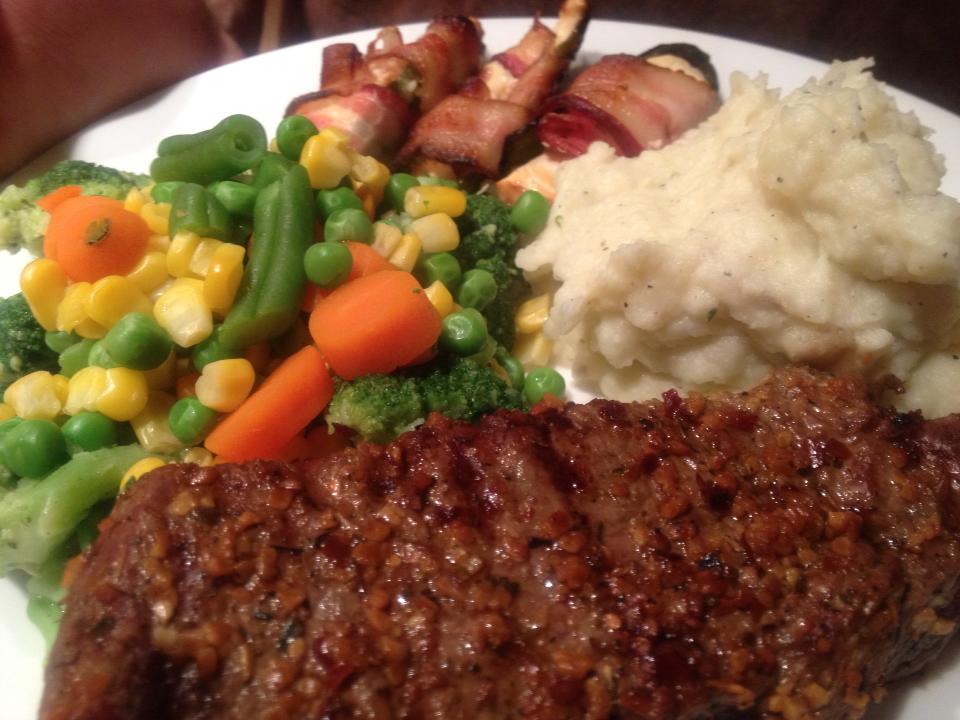 I chose to season our steaks with salt, pepper and Weber Garlic and Herb seasoning.
Can you say…delish?

Here’s a cooking chart for ya! I liked it, and it’s the most accurate one I’ve seen. I may make my own and add it here, with pictures of the various steaks. I guess the Beau will just have to deal with all this kitchen meatatarianism. I doubt he’ll mind.

The Finger Test for Meat Done-ness

Now, I dare-say chaps – this steak experience was a roaring success!
The cow turned out just right, though we didn’t take any snapshots of a sliced portion. Drat!

Lesson learned. Take a second to admire before digging in!

I cheated a bit with the sides, well – the mixed veggies. I really love steamable veggie bags. Green Giant and Bird’s Eye Steamfresh are our personal faves.

As for the taters…here’s the scoop on their tastiness:

4 medium-sized potatoes
1.5 teaspoons of finely chopped Rosemary2 teaspoons of Extra Virgin Olive Oil
3 cloves of Garlic
1 teaspoon of unsalted butter (sub plain yogurt, for a healthier option)
1/4 (plus a teaspoon or two) cup of milk (I used 2%, but skim works great too!)
Salt and Pepper to taste

Viola! You’ve made your very own Rosemary-Garlic Smashed Potatoes.
And you rocked it, because they’re delicious!

OHmygooodness! I almost forgot about the Bacon-Wrapped Cream-Cheese Stuffed Jalapeños!
They’re sneaky, hiding at the back of the plate in the picture above. Why? Well, they’re not too healthy. We’ve been jogging a few miles a day though, so I figured What the hell, let’s splurge! And, by splurge, I mean eat one piece, which is half a jalapeno and a quarter strip of bacon. So…not too shabby, my dear.

6 jalapeños
3 Tablespoons of fat-free cream cheese (you might want to try Neufchâtel cheese, instead)
2 strips of bacon (or turkey bacon), sliced into thirds
1 skewer

Ta-dah! You’ve got an awesome finger-food! [Or a quick way to break your diet…so employ some self control, my peeps.]

Tomorrow – you and I will talk molten-chocolate cupcakes. And next week…we’re going to dabble in some dealings with a sweet leg of lamb. Mmm!

Sending you love from my kitchen,
CC