I’ve got a few friends that are “experienced” and “spontaneous.” When they speak of their sexcapades with different men and women (yes, some of these friendlies are gentlemen and some are wonderful members of the LGBT community) I tend to feel lost and somewhat-in-awe of their “Smash Lists.”

Call me old-fashioned, but the act of being intimate with another human being is not something I think  should be described as “smashing” unless you’re from some other part of the world where telling someone you’ve had a “smashing good time with your SO.” Even in a hangout context, it seems odd.
Who the heck “smashes” anyway…other than The Hulk?

No.
I’ve decided that adults do not “smash.”
So when my friend, the inspiration for last week’s post, called me a prude and unimaginative for not having a smash list, well – the feast was damn near ruined.

Instead of getting my panties in a twist, I decided to fuel my thoughts into some fiery dishes.
It’s been too cold to hit the pavement in my sneaks, so the oven has seen a flurry of activity!

Here I have my version of Zucchini Lasagna. It’s pasta-free! The beau & I love it.

You’ll need 8 oz of Ricotta, 1 lb. of ground lean sirloin, an onion, 1 pot, 1 bread pan, a cutting board and some spices!

First, heat the pot with a teaspoon of vegetable oil or a spritz of EVOO spray. You’ll need to start browning your sirloin before you slice your zucchinis. 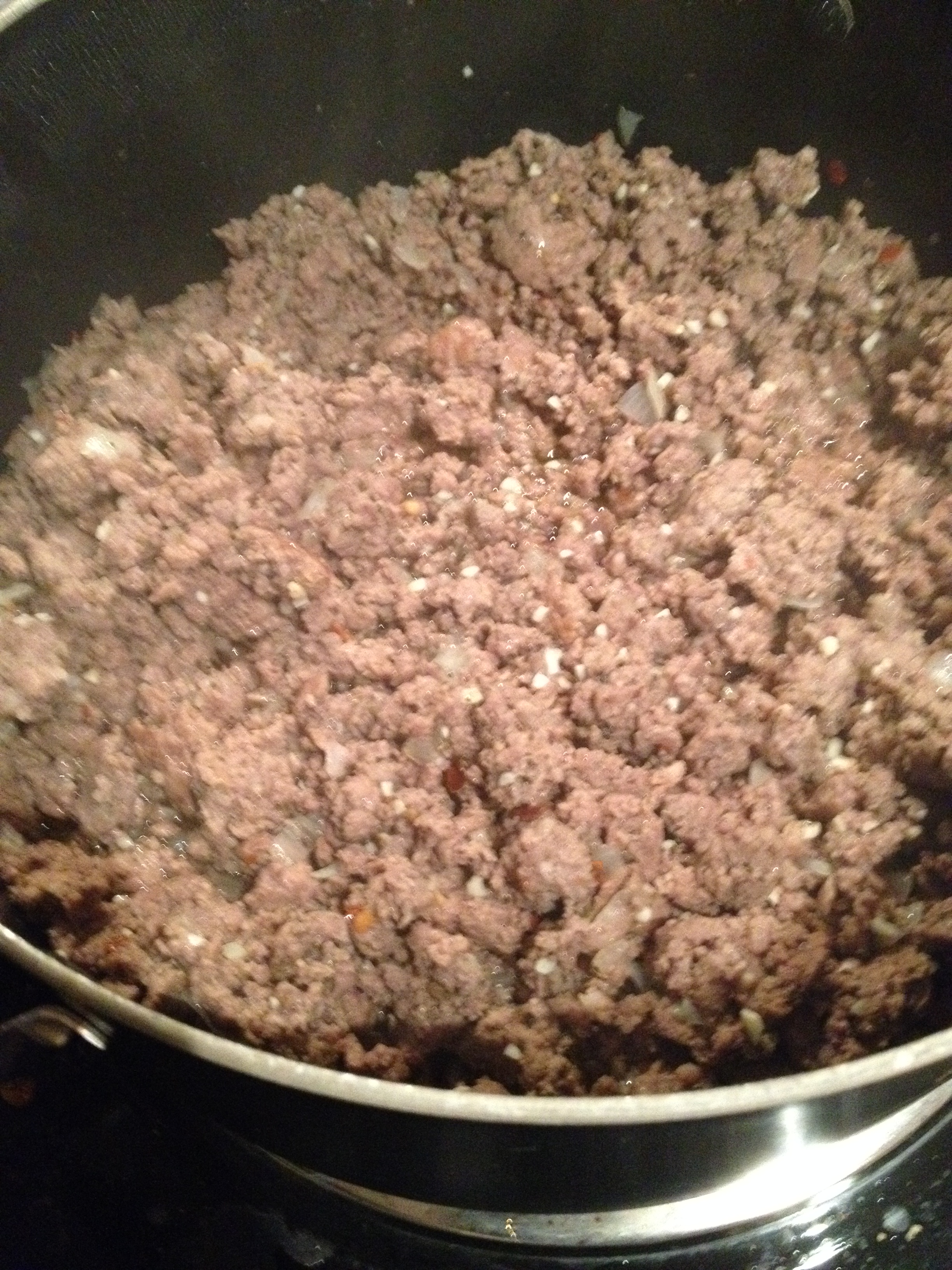 Brown yo’ meat first! I mixed in salt, pepper, 1/4 cup of diced white onion, 1 T each of basil and oregano.

Be sure to preheat your oven to 350 degrees. Now’s a good time to do so.
Now, take 2 medium zucchinis, slice them lengthwise – about 1/4 in. thick. 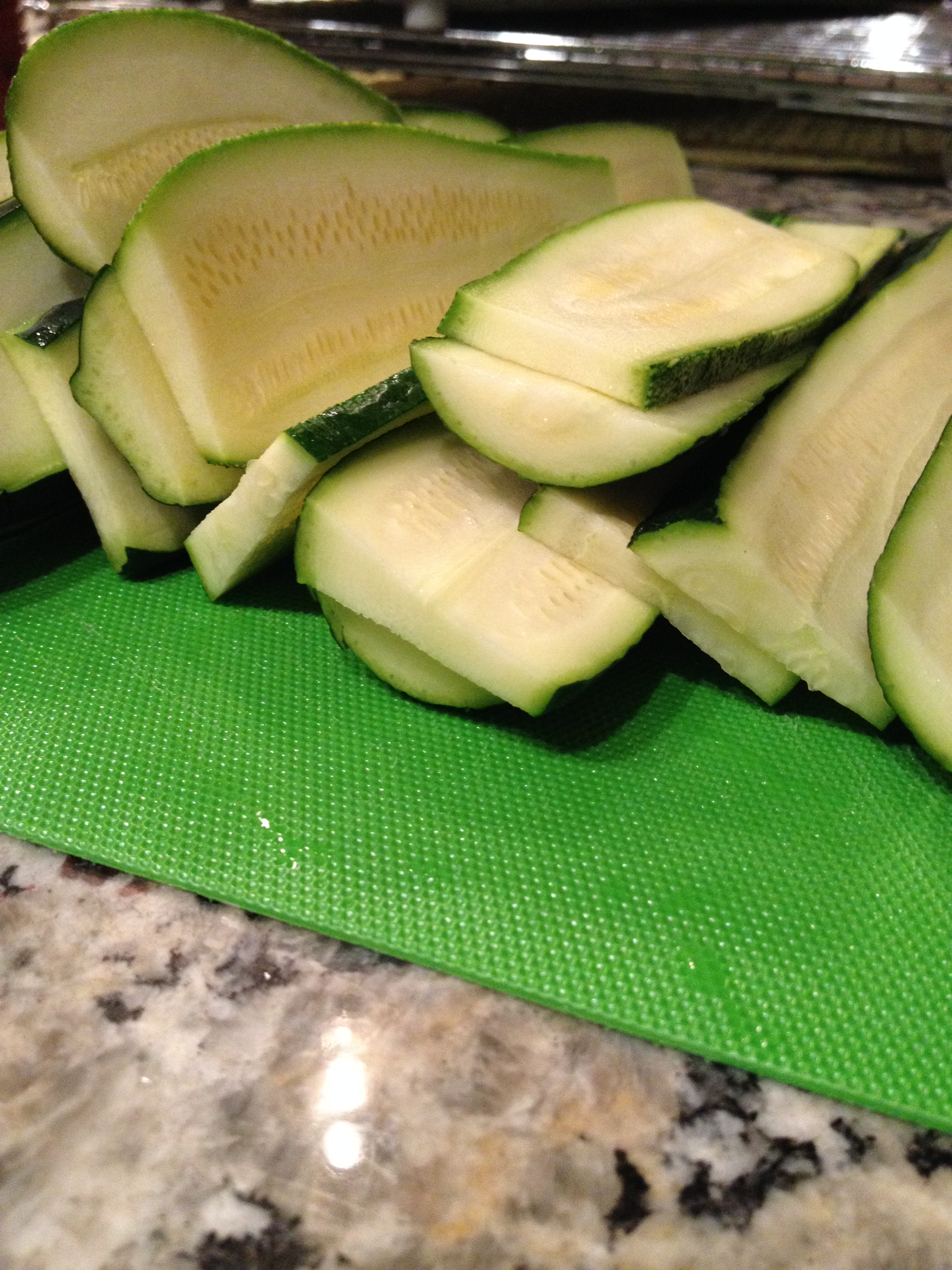 Place a few of them in a foil-lined baking bread pan, ours needed about 3.5 (the greenies were a bit short for the pan) to form one layer. I’m also incredibly lazy about cleanup, so the foil eases my dish-washing woes.

Next, comes the ground sirloin and pasta sauce. We used the Classico Spinach & Parmesan…it was sooooo yummy!
1 lb of ground sirloin to 1 bottle of sauce. If you’re interested in making a spicy marinara from scratch, I’d be happy to throw in some advice there, soon! I was in a hurry, so I used a pre-made sauce. 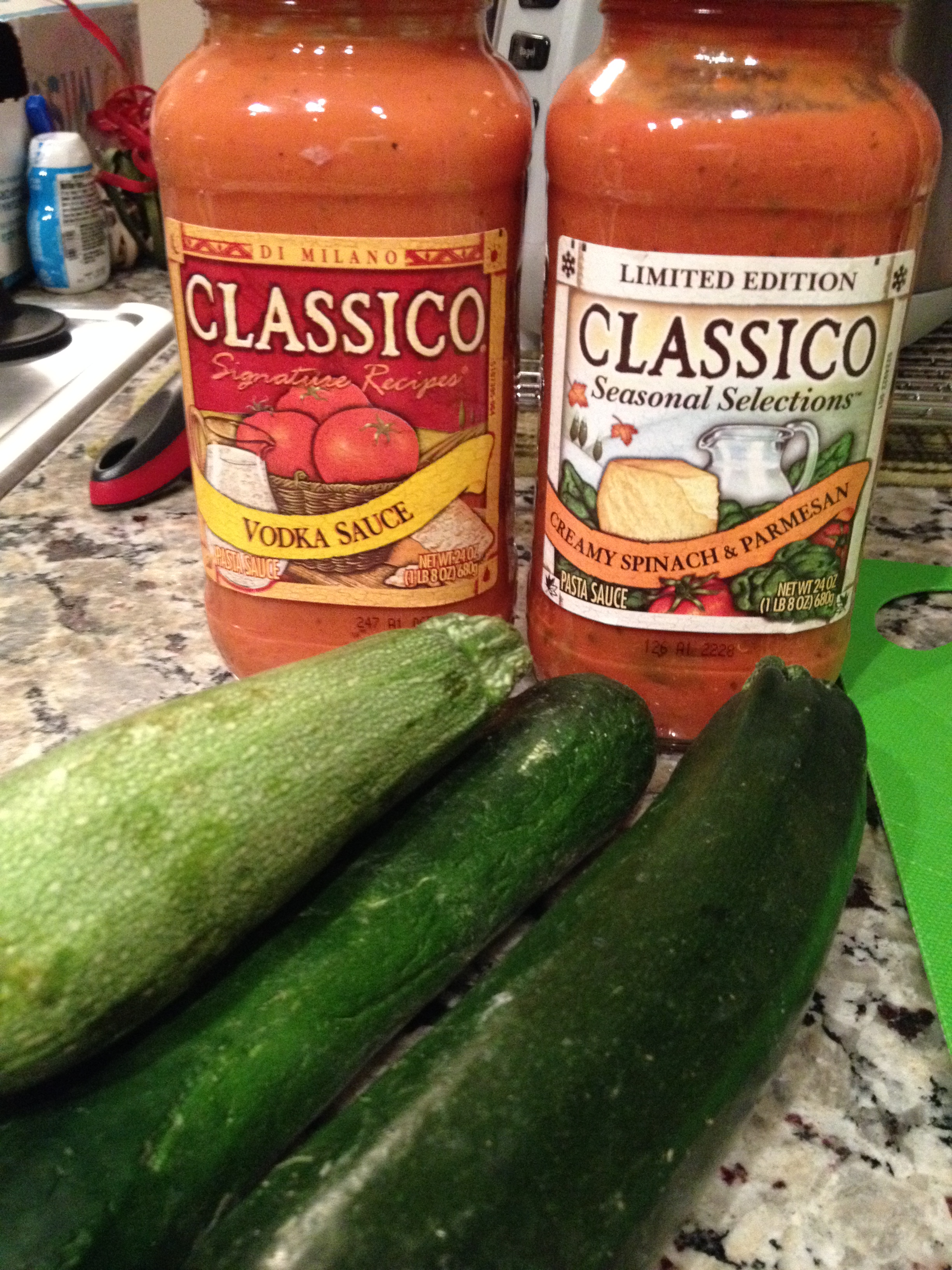 There are two bottles of this scrumptiousness because we also made spaghetti! My absolute fave!

Once the sirloin cooks through, add the sauce and warm it through.
Go ahead and get ready to start layering!

Since you already put the zucchinis down, your next layer will be the ground sirloin and sauce. 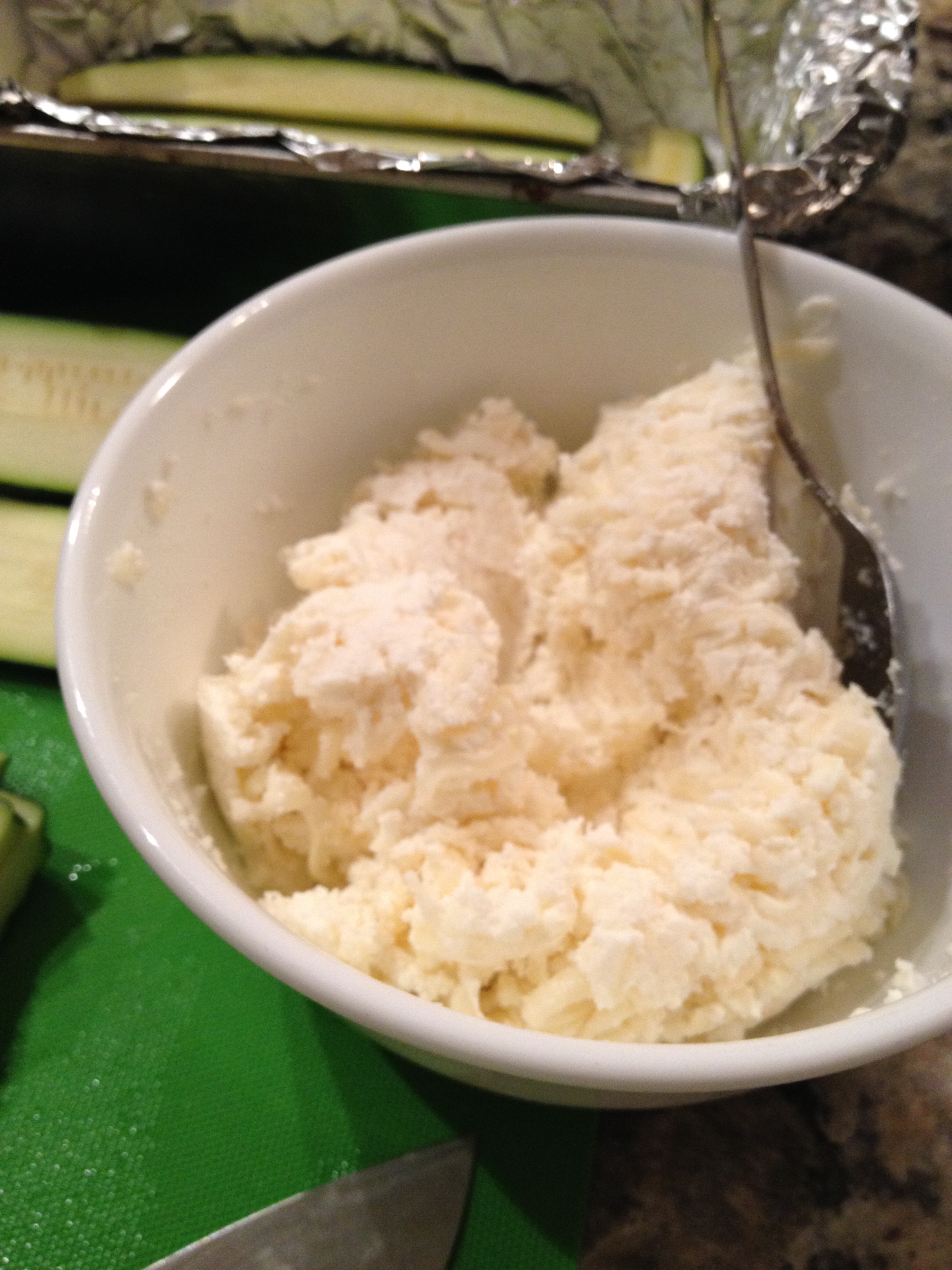 How could anyone go wrong with cheese?

Finally, add a layer of cheese! It’s a 1 part Ricotta (cottage cheese is perfectly fine to use instead), 1 part Mozzarella mixture. I used half a cup of each and put down a thin layer, using 1/3 of the mixture. You should have enough ingredients to make 2.5 layers, ending with cheese on top.
We had a bit of the meat mixture left over, so I used it for our packed lunches on the spaghetti.

Once you’ve finished up your layers, pop that wonderful combination of meat-meets-veggie into the oven at 350 degrees for 45 minutes.  Patience is key, here. Don’t gnaw off any appendages while you wait and are cornered into smelling the yummly scents emanating from your kitcheny parts. 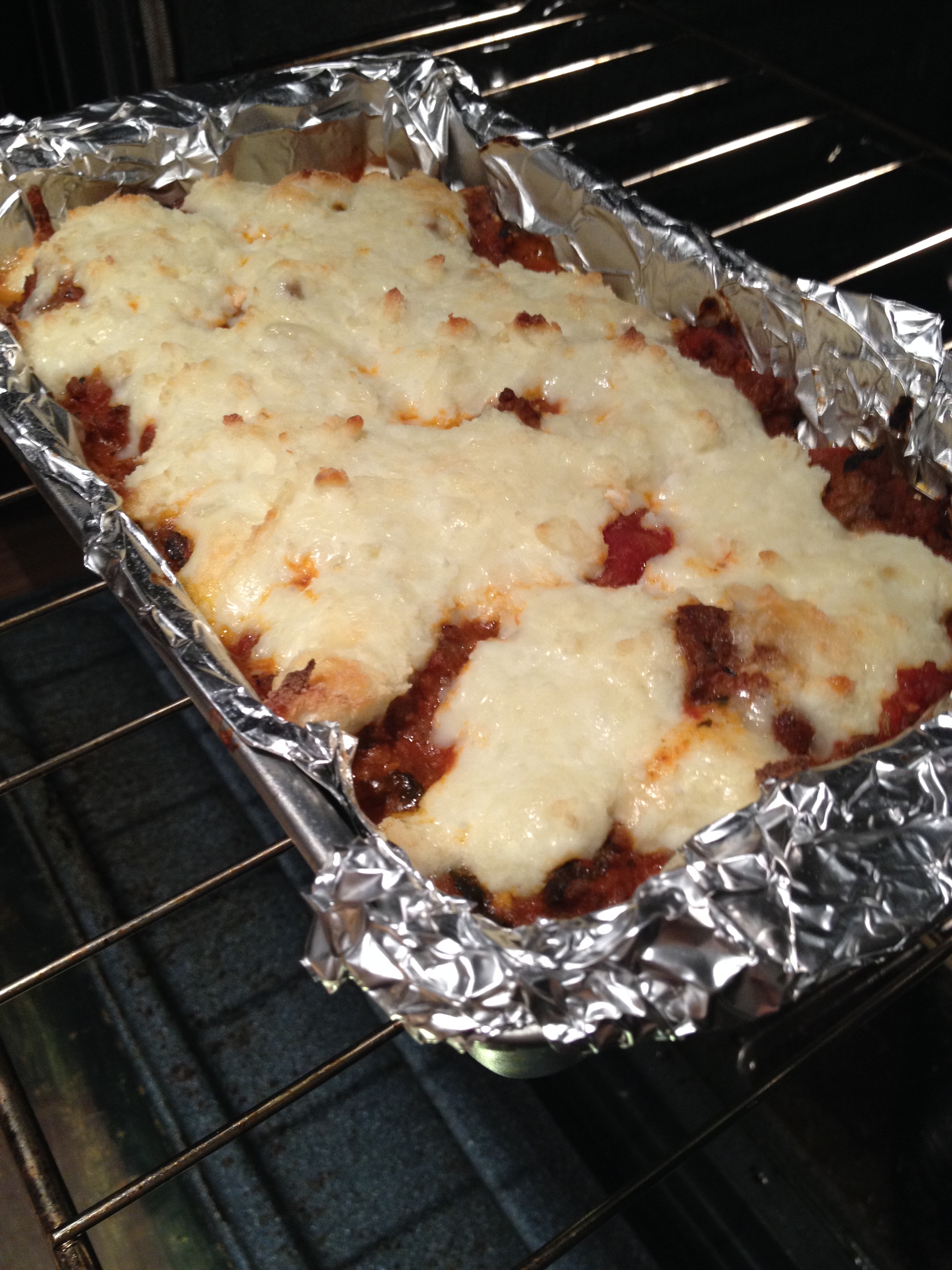 Once your oven dings! then it’s good to go!
Pull it out, carefully – don’t burn yourself in haste, sweetheart.
Next, slice yourself a juicy piece of zasagna!
Pair it with a small side salad and you’ll be dancing right along with your taste buds. 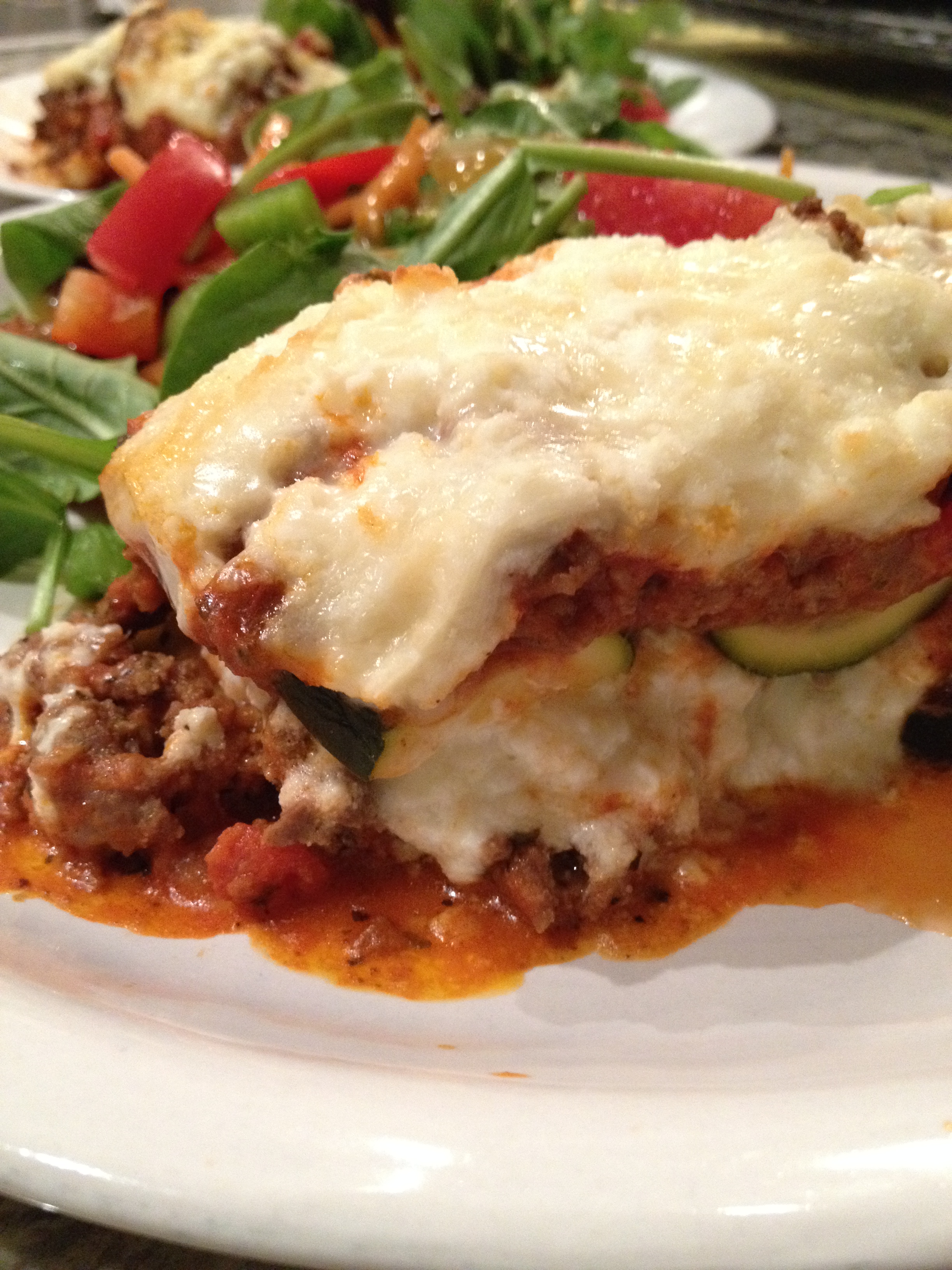 I wish I could give you a taste of this. It’s delish!

This week will bring an abundance of foodie finds and interesting ways to make a twist on traditional dishes.
Get excited!